March-ing Back to an Annual Tradition 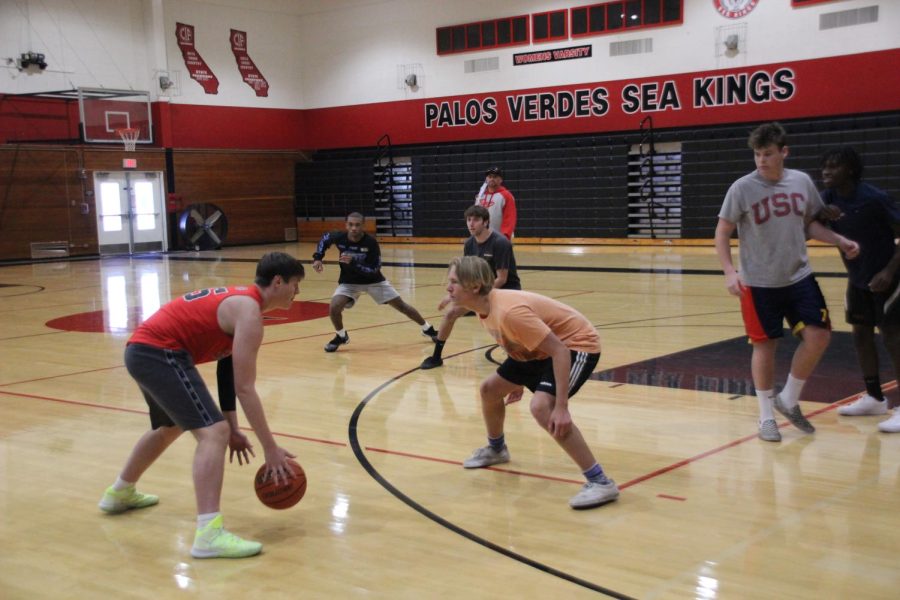 PVHS students show their abilities on the court during the March Madness tournament. (Photo by Luka Ardon)

Last month, March Madness, an annual tradition at PVHS, was brought back after a long break from in-person school and lunchtime activities.

March Madness is a single-elimination style basketball tournament played in reference to the NCAA March Madness that happens each Spring with about sixty-eight college teams competing. Here at PVHS, students bring the competition down to the gym to put on a tournament of their own.

Junior Tate Ballard, one of the ASB members involved in the planning of the competition, shared exactly what the games are composed of.

“[March Madness is] a 3v3 half court tournament that we have in the gym during lunch. The team that scores 11 points first or whoever is winning when the 15 minutes are up wins the game.”

From there, the teams moved up the bracket and played on until there was one winning team. This year, twenty-eight teams signed up via a Google Form and games were consistent throughout March and the beginning of April.

“One challenge we ran into was reserving the gym,” Ballard explained. “We had to make sure that it didn’t conflict with any sports or other events and we also had to make sure we didn’t schedule any games the week of scholar quiz.”

For this reason, March Madness games were halted for about a two weeks in the middle of the month and picked back up after Scholar Quiz finished.

Alongside Ballard, a few other ASB members helped get the gym ready each lunch and run the tournament. Together, they set up cones to distinguish courts, refereed matches, and also brought a speaker and microphone to play music and announce the games.

“Personally, I think [the competitions] have been going great,” Ballard added. It seems like everyone has been really enjoying the games and having a good time.”

This tradition is one that is special to PVHS and always provides a great opportunity to get involved at school whether a student wants to get their head in the game or simply cheer on their friends from the sidelines.

“Not only do our basketball players love it but also it’s a super fun way to just get everyone together rooting on their friends.”

One player, senior Zach Dawson, says his team got together  “for the sole reason of domination on the court.”

“[We] currently haven’t lost and overall everyone’s had an awesome time.” Dawson said on March 20, “I didn’t play freshman year so I’m definitely glad we had it my senior year.”

The March Madness competition wraps up next week.